The game was developed as a coursework piece for the module titled 'Console Development' with Visual Studio 2010 in c++ using the Abertay Framework. It is a side-scrolling beat 'em up where the objective of the game is to save the city by eliminating all of the enemies. There is an enemy situated on top of every building, carrying a gun and keeping a watch for the player. The player can ascend buildings by wall jumping and defeats the enemies by punching them.

The buildings are procedurally generated with varying widths, heights and separations. The enemies can be pushed off the buildings, losing a great deal of health when they land. The enemies also fade away when killed. The collision detection was implemented using bounding box collisions and line intersections.

The enemy AI is implemented using a state-machine of four states: Searching, Attacking, Advancing and Retreating.

The enemy does not know the player exists so will keep watch for potential threats, alternating between looking left and right whilst remaining in a fixed position. If the player enters the enemy's line of sight then the enemy is now aware of the player.

The enemy is aware of the players existence and can see them so will periodically shoot at them until the player is either dead or out of sight. 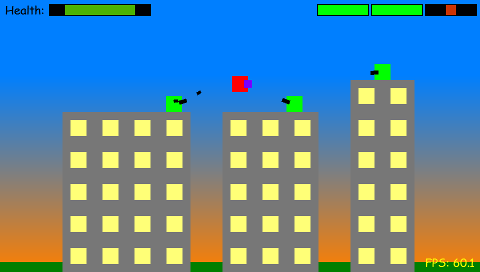